You are leaving the country website to access another site in the group. Regulatory constraints and medical practices vary from country to country. Consequently, the information provided on the site in which you enter may not be suitable for use in your country.
Article Coccidiosis Poultry

Environmental factors that are of significance for the control of coccidiosis and poultry health include stocking density, litter condition, temperature, feeding and water provision, and ventilation. At temperatures causing discomfort, feed consumption decreases, and thus so does consumption of the anticoccidial. Insufficient ventilation could lead to wet litter, which facilitates the sporulation of Eimeria. An increase in litter humidity by 15% – 35% is necessary for the sporulation of oocysts and is crucial after the application of coccidiosis vaccines to allow adequate sporulated oocysts to re-infect birds to establish a long-lasting immunity. High population density poses an increased risk of coccidiosis due to the competition for food and water among the chickens, as well as a higher concentration of oocysts (Hamet et al. 1982). Insufficient feeding and drinking space due to overcrowding has an influence on feed consumption, and thus also over the intake of anticoccidials. The quality of the feed, i.e. adequate levels of protein, minerals, nutritional supplements, and anticoccidials, is of considerable importance for the prevention of coccidiosis, especially in developing immunity in vaccinated birds.

In addition to the use of anticoccidials and vaccinations, there are a number of other management practices that play a role in coccidiosis management. Of particular importance are flock nutrition and biosecurity.

Sanitation and biosecurity play an important role in preventing the onset of coccidiosis infection. Producers must:

Ensure the proper removal of poultry litter from the houses and moving it off-site, as well as proper cleaning and disinfection of poultry houses after cleanout, ultimately reducing the protozoal load on the farm.

For many years, anticoccidial drugs have been considered the gold standard for use as preventative in-feed medication. Most drugs are classified as coccidiostat or a coccidiocide.

Some drugs may have both coccidiostatic and coccidiocidal properties, depending on the dose used and the time the oocysts are exposed to the drug.

The biggest problem with anticoccidial products is the development of resistance.

Coccidiostats and coccidiocides are given in a single grow-out cycle. Usually, the coccidiostat is given first for about two-thirds of the cycle, followed by a coccidiocide.

However, despite ongoing attempts to avoid drug resistance, it remains a leading limitation of anticoccidial programs. As well, consumers are becoming increasingly concerned about the use of drugs and/or chemicals as standard inclusions in feed for food-producing animals. Since research has repeatedly demonstrated that treating diseased birds is much less effective than preventing coccidiosis outbreaks in the first place, vaccination is a logical solution.

Resistance is defined by the World Health Organization (WHO) as "the ability of a parasite strain to survive and/or multiply despite the administration and absorption of a drug in doses equal to or higher than those usually recommended but within the limits of tolerance of the subject" (WHO, 1965).

Live oocyst vaccines against coccidiosis in poultry have been successfully used by the industry since 1965. To date, the vaccines have mostly been used by breeder flocks but, in recent years, have been more commonly used for commercial broilers, roasters, and turkeys, particularly in the USA, Latin America, and Europe.

Coccidiosis vaccines induce protective immunity, in various degrees, to protozoal infection through controlled re-infection during the first four to five weeks of a bird's life. The complex lifecycle stimulates a number of immunological responses (innate, specific, and non-specific) which vary in anticoccidial effect.

Precocious and Non-Precocious coccidiosis vaccines have been developed.

●      Shorter lifecycle, with one of the asexual stages of the coccidia lifecycle having been lost

●      Level of immunity not complete, even with full recycling process (immunity to coccidia is species AND stage specific)

●      Less protection against a field challenge

●      Replication rate significantly reduced because of a shorter life cycle, resulting in less than optimal re-infection and recirculation

Different nutrients have been shown to have different effects on the prevalence of coccidian infection in poultry flocks. Some examples from the scientific literature are listed below:

In general, if the saccharide content of a flock's feed exceeds 50% of the diet, the birds' native intestinal flora will be altered, resulting in reduced growth and enhanced oocyst excretion. Wheat-based diets are known to be more favorable.

Although high levels of protein (≤16%) can enhance the development of coccidiosis lesions, the increased protein protects birds against severe weight loss during clinical infection and the amino acids are necessary for developing immunity.

Magnesium, in the form of magnesium oxide, induces a reduction in performance by the birds, due to its laxative effect.

Zinc has a positive effect on weight gain in chickens infected with E. acervulina.

Vitamin A plays an important role in the maintenance of mucosal integrity; deficiencies promote coccidial colonization.

Vitamin E, an antioxidant, stimulates the innate and acquired immune response, reducing the effects of a coccidial challenge.

Vitamin K promotes coagulation and has been used to treat hemorrhaging. Flock mortality associated with E. tenella and E.necatrix infections was reduced with Vitamin K supplementation.

B vitamins are essential for the development of Eimeria populations and may promote infection.

Vitamin C, also an antioxidant, stabilizes intestinal cell membranes and can be beneficial in protecting against coccidiosis. 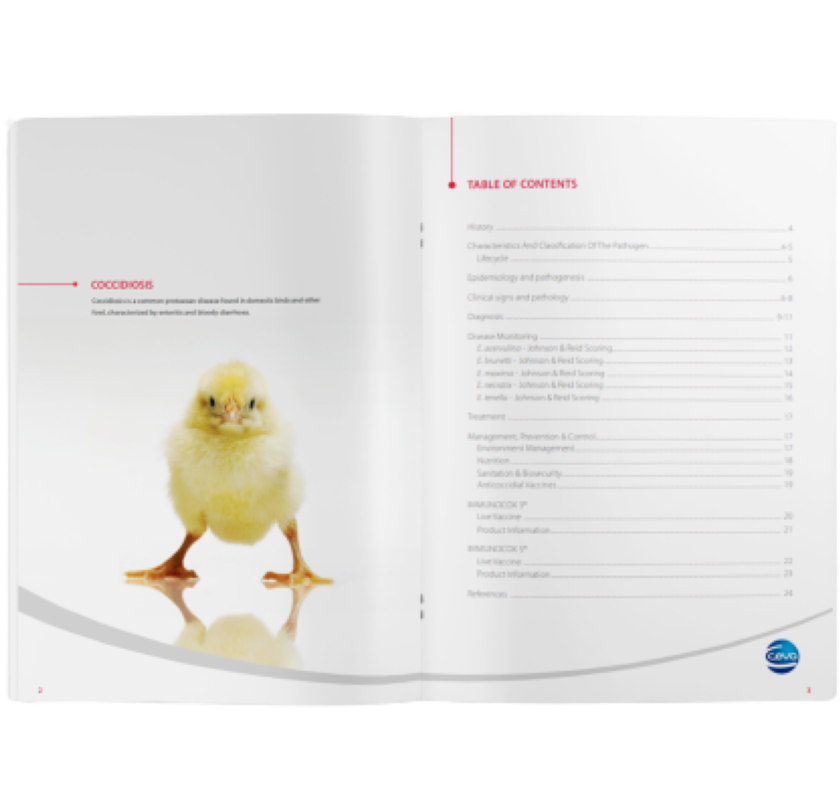 COCCIDIOSIS MANUAL
To learn about disease prevention, monitoring, and control
Gain insight into some key management practices and their roles in coccidiosis management.

How to monitor Coccidiosis ?

Read More
COCCIDIOSIS MANUAL
To learn about disease prevention, monitoring, and control
Gain insight into some key management practices and their roles in coccidiosis management. 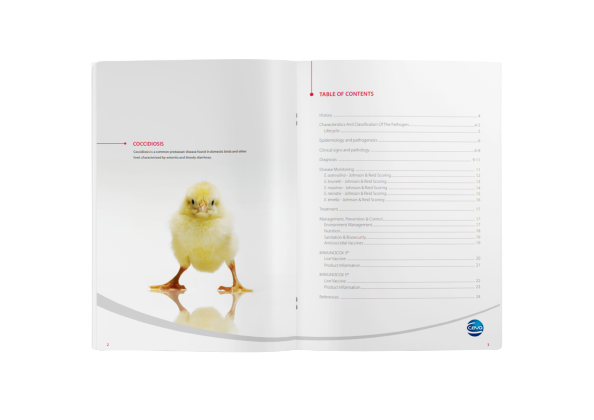